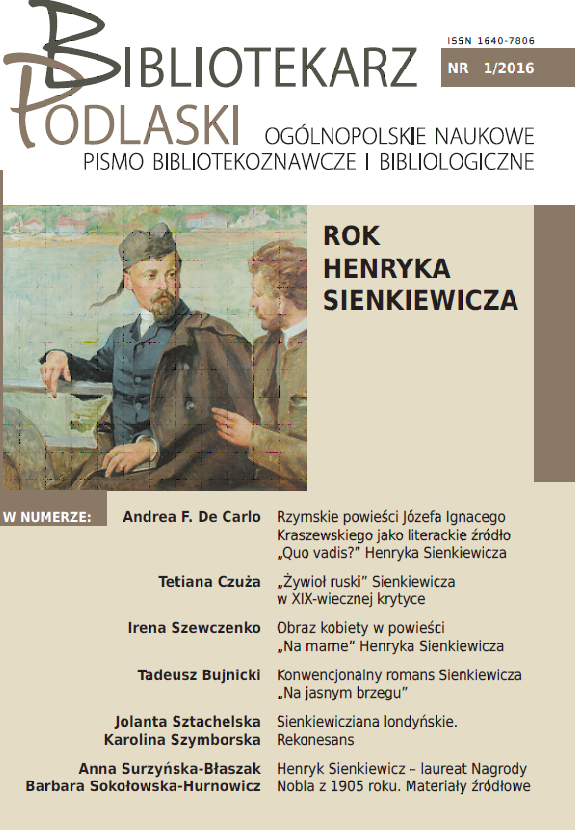 I. Przyszłość sienkiewiczologii (The future of Sienkiewicz studies – interviews)

„I have grown up (to) reading Sienkiewicz…”. A Talk with Professor Tadeusz Bujnicki

„The older I am, the more I appreciate Sienkiewicz”. A Talk with Professor Maciej Gloger

Józef Ignacy Kraszewski’s Novels on Roman History as a Literary Inspiration for Henryk Sienkiewicz’s Quo Vadis
The article analyses the common elements which exist between Rzym za Nerona (Rome under Nero) by Józef Ignacy Kraszewski (1817–1882) and Quo Vadis by Henryk Sienkiewicz (1846-1916); in particular, it aims to bring to light the possible influences of Rzym za Nerona on Quo Vadis and its contribution to the genesis of the Sienkiewicz’s novel. In the mid-19th century and early 20th century European intellectuals and writers made a real rediscovery of the times of Nero and the pagan-Christian conflict. That trend was also visible in Poland, where both novels mentioned used the ancient Rome times as a metaphor to represent the contemporary world. The fall of Rome was always hailed as the fall of the powers which kept Poland enslaved and divided. It is a well-known fact that the unhappy fate of enslaved and oppressed Poland underlies the genesis of Quo Vadis.
Key words: Quo Vadis, Rzym za Nerona, Józef Ignacy Kraszewski, Henryk Sienkiewicz, comparative studies

Sienkiewicz’s ‘Ukrainian Themes’ in the 19th-Century Critical Reception
The article considers the critical reception of Ukrainian themes in Henryk Sienkiewicz’s With Fire and Sword, focusing particularly on the revaluation of the Cossack uprisings made in the novel, and on the writer’s play with romantic and baroque artistic and historical concepts. The author demonstrates the whole spectrum of critical reactions to the use of Ukrainian themes in Sienkiewicz’s work.
Key words: literary criticism, romanticism, Cossacks, Polish-Ukrainian historical relationship

On the Bright Shore: Sienkiewicz’s Traditional Romance Novel
The article looks at Henryk Sienkiewicz’s short novel On the Bright Shore – one of his lesser-known works – which can be best classified both as a traditional romance and a tendentious novel. The author of the article outlines the history of the novel’s composition, demonstrating that – in all probability – it was created from unused fragments of other literary projects. The analysis focuses on the main characters, the erotic motifs and the history of the novel’s critical reception. Sienkiewicz’s work received rather unfavorable reviews, and – as the author of the article remarks – in fact, it is full of various fixed patterns, conventions and stereotypes that the Polish novelist employed in his other, more ambitious texts.
Key words: tendentious novel, romance novel, eroticism, short story writing

The Orthodox Church and Orthodox Communities in Henry Sienkiewicz’s With Sword and Fire
The article discusses the Orthodox themes in Henry Sienkiewicz’s With Sword and Fire. Even if the theme is of secondary importance in the novel, the Polish novelist managed to demonstrate how religion was subject to political manipulation in the 17th century. Part of the analysis draws an analogy between the events depicted in the novel and the contemporary social and political situation in the Russian Partition at the time Sienkiewicz worked on the novel: intensive russification, political radicalism of labor force, ethnic disquiets, and the birth of new national identities.
Key words: the Orthodox church, the 17th century, ethnic discourse, russification

The Chivalric Code in the Trilogy. Perspectives
The article considers the presence of the chivalric code in Sienkiewicz’s Trilogy. The author draws on the examination of military and battle vocabulary from the three famous novels, and – referring to ancient and medieval epic chivalry – shows different ways of representing the war in each part of the Trilogy. The main characters are analyzed in the context of the European ethos of warrior, and – as the author argues – can be treated as paragons of chivalry. The particular attention is paid to the eponymous protagonist of the Trilogy’s last part (Pan Wołodyjowski), who is a hero of a bit different kind: initially, he is not a paragon of virtue, and Sienkiewicz shows the process of his gradual maturity as well as his numerous faults, which endears him to the readers.
Key words: the chivalric code, literary character, the motif of war, gentry’s culture

London’s Sienkiewiczana. A Review
The article focuses on Sienkiewicz’s one week-long stay in London during the first stage of his journey across the Atlantic, which was described in a series of reportages Letters from the Journey to America. The 19th-century England and its capital city are shown by Sienkiewicz as an exceptionally modern state, setting a direction for the whole Western civilization. The writer often compares the organization of English society to the Polish context, which enables him to criticize (in a roundabout way) the authorities of the Russian Partition for their retrograde economic and social policies. Following in the footsteps of the Polish Nobel prize winner, the authors of the article relate their research in the Polish Social and Cultural Association (POSK) and in the British Library. Its main focus was the reception of Henryk Sienkiewicz’s works outside Poland.
Key words: travel writing, journeys of Poles to England, library research, reception of Henryk Sienkiewicz’s works

Henryk Sienkiewicz, the Nobel Prize Winner of 1905. Primary Sources
The article focuses on the context within which Henryk Sienkiewicz was awarded the Nobel Prize in Literature 1905 and presents primary sources related to the event. First, the authors introduce the problem of interpreting Alfred Nobel’s last will and all the controversies around the prize itself as well as the election of laureates. Next, they concentrate on misunderstandings and ambiguities, which, years after Sienkiewicz’s prize, remained unresolved – it was not until the materials of the Swedish Academy were revealed and critically reviewed that certain hard facts were established and doubts dispelled. The article offers numerous primary sources from the beginning of the 20th century: Professor Stanisław Tarnowski’s letter with the first recommendation of Henryk Sienkiewicz for the Prize, the Swedish Academy’s decision of 9 November 1905, the text of the presentation speech, etc.
Key words: the Nobel Prize in Literature, primary sources, Henryk Sienkiewicz

Tadeusz Miciński’s Unknown Russian Article on Henryk Sienkiewicz
The author presents a recently discovered 1916 article from Utro Rosii, dedicated to Henryk Sienkiewicz, and written by Tadeusz Miciński (1873–1918), a representative of the Young Poland Movement, who stayed in Russia during WWI. As a regular contributor to Polish and Russian press, Miciński openly deplored Germans and favored the idea of united Slavs actively opposing German expansion. What was problematic for him was Russia’s attitude to Poland’s aspirations to independence. Referring to Sienkiewicz, Miciński wanted to minimize the risk of Polish-Russian confrontation after the war. He perceived the Polish-Ukrainian conflict of the 16th century, so aptly represented by Sienkiewicz in the Trylogy, as a sinister warning of what might happen in the future between Poland and Russia.
Key words: Henryk Sienkiewicz, Tadeusz Miciński, World War I, press, Russia, Germany

Labyrinth, There and the First Christian’s
The text reviews the anthology of poetry Konstelacja Toposu [Topos’ Constellation], which brings together verses of the poets-contributors to the Polish literary bimonthly Topos. The reviewer focuses on the particular segments that constitute the volume: poems, motifs that link the poems together, Wojciech Kudyby’s introduction and Jarosław Ławski’s afterword, as well as to other reviews of the anthology. As it turns out the main common element of the above mentioned are metaphysical questions and quests of the contemporary man, and a yearning for metaphysics, which has been ousted from the contemporary critical and philosophical discourse. As the reviewer emphasizes, the poems from the anthology offer a complex statement on the role of poetry in explaining the world.
Key words: the bimonthly Topos, anthology, metaphysics, reception

1957. Ełk in Gisela and Klaus Skibowski’s Camera
The text is a review of Rafał Żytyńc’s Ełk in Gisela and Klaus Skibowski’s Camera, a bilingual volume (with the German version by Winfried Lipscher) published by the Museum of History in Ełk. Apart from the historical commentary the book contains the photographs taken by Gisela and Klaus Skibowski, which originally constituted a reportage of a four-day trip to Poland in 1957. The reviewer comments on the numerous problems discussed by Żytyńc: the history of (attempted) bilateral relations between Poland and West Germany from 1955 to 1958, visits to Poland made by journalists and tourists from West Germany after 1956, the history of Skibowski family against the history of Ełk, and the details of Gisela’s and Klaus’s trip. The reviewed book is also an official catalogue of the exhibition organized the Museum of History in Ełk, in a narrow-gauge railway area, on 25 July 2015.
Key words: reportage, history of Ełk, history of West Germany, Polish – German relations in the 20th century, history of Skibowski family

Masuria’s Capital
The text reviews Stefan Michał Marcinkiewicz’s The Mythical Capital of Masuria. Between Ełk and Lyck. In his book, Marcinkiewicz – a sociologist and Assistant Professor in Chair of Sociology, the Department of Social Sciences, the University of Warmia and Mazury in Olsztyn – asks himself whether Ełk was truly a mythical capital of Masuria, how the myth was born and what contributed to its demise. However, as the reviewer remarks, the book offers much more: it outlines the history of Ełk, a quiet town in the Warmia and Masuria district, whose past illustrates the processes of forming identities, patriotism and local myths.
Key words: Elk, Lyck, history of Mazury

An Unfinished Research into the 18th- and 19th-Century Polish Journals and Newspapers
The review looks at Piotr Żbikowski’s three-volume publication on Polish journals and newspapers. It aims to analyze the content of the publications published from 1796 to 1806 in the three partitions, and it provides a selection of the most representative fragments and quotations. Żbikowski focused on three periodicals: Gazeta Krakowska (the Austrian Partition), Gazeta Warszawska (the Prussian Partition) and Kurier Litewski (the Russian Partition), and the reviewer considers this selection a valuable source of knowledge about the history of Polish people during the initial period of partitions. However, she points to the fact the source material needs to be read with caution as the information included in the press at the time was often biased, distorted and censored.
Key words: the 19th-century periodicals, history of the 18th and 19th centuries, partitions in Poland, history of journals and newspapers

In the Beginning Was Priest Twardowski
The review looks at the volume of collected prose In the Spirit of Franciszek Karpiński, edited by Dariusz Kulesza and Jarosław Ławski (Białystok 2015) and prepared to commemorate the twentieth anniversary of the Franciszek Karpiński Polish Literary Prize. Pondering upon the role of literary awards in the contemporary cultural space, the author presents the history of the Białystok prize, introduces its patron figure and the first laureate Jan Twardowski as well as other awarded poets, essayists, prose writers, editors and scholars. The reviewed volume contains a series of biographical notes on all the laureates.
Key words: literary prize, Franciszek Karpiński, anniversary, biographical notes, primary sources

Remarks about a New Publication on Muslims in Poland
The text reviews Krzysztof Kościelniak’s Polish Muslims. Religion and Culture, which concerns Muslim immigrants from Near and Middle East, Central Asia and North Africa, who settled down in Poland from 1989 to 2014. The reviewer relays the problems discussed in the study: forms and means of migration, forms of employment among Muslims, their social and political engagements, the role of Muslim Religious Union, etc., and highlights a few faults of the book: the inappropriate title, an inconsistency in the use of terminology, the methodological mistakes that consist in explaining certain phenomena occurring in Poland by taking examples from the counties where Muslims communities are relatively larger.
Key words: Muslims in Poland, Islam in Europe, Muslim culture and religion

Ukrainian Popular Literature: New Horizons of Description
The review focuses on the analysis of the monograph by Olena Romanenko. The rich illustrative material incorporated into this publication is based on the latest research into Ukrainian contemporary literature, its developments and trends, and shows an increasing importance of popular literature in Ukraine. The review contains numerous references to critical literature as well.
Key words: contemporary Ukrainian literature, popular literature, reader’s profile

The International Polish-Belarusian Conference “The Future of Imagology”. Białystok 13-14 May 2016. A Report.