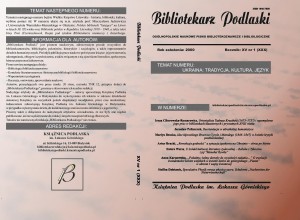 The Orientalist Tadeusz Krusiński (1675–1757) and the Copies of His Works in Eighteenth-Century Monasterial and Private Libraries
The article examines the distribution channels of printed books in the eighteenth century (and earlier), paying special attention to so-called ‘author’s gifts.’ Copies of old prints with handwritten dedications reveal at least part of the author’s social contacts, which, in turn, may contribute to the deepening of biographical research into the author’s private life and ways of dissemination of his writings. As the case of Tadeusz Krusiński’s works indicates, each and every copy deserves to be subject to meticulous scrutiny.
Key words: old prints, Tadeusz Krusiński, history of rare books collection, bibliology

A Turn in the Ukrainian Humanities
The author of the article attempts to demonstrate how the crisis in Ukrainian society is refl ected in the humanities. After the fall of the Soviet Union, there came a period of stagnation in Ukraine. A change was triggered by the Revolution of Honor which took place in Ukraine in winter of 2013. Since then new models of scientifi c development have been proposed, especially by young Ukrainian intellectualists; however, some of these ideas require active state support. The modernization of humanities necessitates taking overall measures. This means that some state institutions, such as the National Academy of Science and universities, need to be reformed. A great tension can be observed among scholars specializing in literary studies and history – they keep arguing about methodologies, criteria of assessment and perspectives for further development. The liberal research models promulgated in the works of Y. Hrytsak, T. Hundorova, and A. Portnov are in a stark confl ict with the remnants of old and outdated academic thinking of the previous era. A ‘lustration’ in the academic ranks seems necessary, but there exist no procedures to implement it. The humanities in contemporary Ukraine ask for fundamental changes – that is the main task for the nearest, European future.
Key words: the humanities, science, crisis, turn, the Revolution of Honor, literary studies, history, lustration

The Revolution of Dignity and Language Problems in Ukraine. An After-Battle View
The paper considers language phenomena (as the products of state policies, public feelings and a general state of affairs in Ukraine) in the context of the recent socio-political upheaval. The author chooses the national language as both the starting point for his deliberations and the main category that enables him to examine the changes that are happening in the Ukrainian society. The national language always shapes the culture and conditions the identity of the people who live within the given cultural sphere, but in contemporary Ukraine this process has assumed an unprecedented scale. The analysis presented in the article touches upon typical phenomena that can be observed in Europe these days, e.g. the anglicization of everyday language and sociolects as compared with the standard Ukrainian.
Key words: Ukrainian, English, sociolects, everyday language

The Roots of Jewish Female Literature – Rebeka of Tykocin and Her ‚Meneket Rywka’
The article presents the circumstances surrounding the composition of the first book by a Jewish female author. The book – written in Yiddish in sixteenth-century Tykocin (in Podlasie), a small town in Eastern Poland – is entitled Meneket Rywka (Nanny), and its author, Rywka bat Meir (Rywka, Meir’s daughter), conceived it as a morality guide. A meticulous analysis of the text has revealed that Rywka was exceptionally well-educated and must have been moving in intellectual circles. The article discusses the main problems considered in the book, as well as the history of its critical reception, and features some fragments of this prose translated into Polish.
Key words: Yiddish literature, Renaissance, Jewish female literature, Meneket Rywka

‚Let’s Show Them We Measure Up to It…’ The Evolution of Peasant Women’s Self-Consciousness as Refl ected in Letters Sent to Galician ‚Piast’ during World War I
The article discusses the status of female peasants in Galicia during World War I, an important issue that still awaits to be fully researched by scholars. Female peasants from Galicia did not happen to be the focus of academic examination of any kind, neither did they come under scrutiny by the press at the time. It was male peasants that created – deliberately or not – the image of life in rural areas. Journalists, if they paid any attention to women at all, would tend to perceive women as the most ‘unrecognized’ element of the rural life as well as the most persistent obstacle to civilizational and cultural innovations. The Great War changed the situation. Suddenly, the “muted” participants of social life were forced to take responsibility for what so far had been solely male domain – in other words, they gained social “visibility”. The article shows how female peasants voiced their opinions in the regional press of Galicia, particularly in Piast, in which the editorial board was more than willing to provide them with such opportunities.
Key words: World War I, regional press, emancipation of women, journalism

Speculative Physik versus Physica Sacra. Schuberts ‚Nachtseiten der Naturwissenschaf’
The article announces the edition of a translation of Gotthilf Heinrich von Schubert’s Dark Side of Natural History, a work that signifi cantly contributed to the development of romantic philosophy. The author considers key problems of the art of translation and presents major categories and ideas of Schubert’s “dark philosophy.” Last but not least, the article makes up for insuffi cient entries concerning Schubert in classic histories of philosophy.
Key words: Schubert, romanticism, philosophy, natural science

A Paradox of the Small Native Land: On Sokrat Janowicz
The author of the article focuses on the dialogue between cultural values in so-called small native lands as represented by three contemporary writers from Belarusian – Polish – Lithuanian borderlands: Sokrat Janowicz, who advocated a dialogue between Polish and Belarusian cultures; Tadeusz Konwicki, who, even though always unwilling to give interviews, shortly before his death revealed his strong opinions in In a Hurry; and Aleksander Jurewicz, whose works describe a search for the lost native land. Three writers and three views of the small native land…
Key words: small native land, regionalism, borderland cultures, poetry from Eastern Europe

Elżbieta Feliksiak (1937–2015) – Her Life and Work
The article commemorates Elżbieta Feliksiak, a long-standing Professor at the University of Białystok, the Head of the Research Unit in Theory and Anthropology
of Literature, the Director of the Institute of Polish Studies, a translator, a publisher, the President of Białystok Branch of the Adam Mickiewicz Literary Society, the originator of “Library of Memory and Thoughts” publishing series, and – above all else – a pioneer in research into memory of eastern Borderlands of Poland. The author of the article – fi rst Professor’s student and later her academic associate – presents Elżbieta Feliksiak’s professional and private life. This intimate remembrance is accompanied by samples of poetry of the late scholar.
Key words: Elżbieta Feliksiak, Vilnius, eastern Borderlands, the East

Vilnius and Europe. (A Belated Review)
The article, as its author asserts, comprises two texts. The fi rst one is a review of “Vilnius and Vilnius Region as a Multi-Cultural Landscape,” edited by Elżbieta Feliksiak, which collects proceedings of the International Conference held in Białystok, 21–24 September 1989. Published in four volumes in 1992, the book features: testimonies and memoirs concerning Vilnius with its inhabitants and ethnic minorities; history of the town and its cultural and educational institutions; and, fi nally, an outline of literature in Vilnius. The second rationale behind the text is the author’s attempt to return to the time of a great socio-political upheaval that took place in Eastern Europe in 1989 – after all, Feliksiak’s book gave a scholarly expression to the aforementioned moment in history.
Key words: Vilnius, Eastern Europe, geopolitics, Polish-Lithuanian cultural bonds

The International Conference “Aesthetic Aspects of the Literature of Polish, Belarusian and Lithuanian Tatars (from the Sixteenth to the Twenty-First Century)” Białystok–Sokółka 14–15 November 2014. A Report

The Conference “Birth of Modern Consciousness: Young Positivists of Warsaw: Weekly Review 1866–1876.” The First Edition: “A Picture of Man – Revisions.” A Conference Report

A Report from the Seminar “On Sergiusz Piasecki in Minsk”