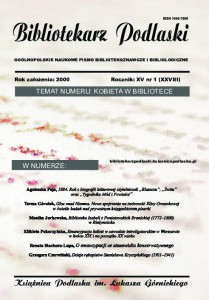 I. Nauka o książce i bibliotece (Book and Library Science)

1884. A year from the reading biography of the readers of ‘Bluszcz‘ (‘Ivy‘), ‘Świt‘ (‘Dawn‘) and ‘Tygodnik Mód i Powieści‘ (‘Fashions and Novels Weekly‘
The author of the article presents the development of female press in the second half of the nineteenth century, taking as an example three magazines published and edited by women and targeted at female readers. The magazines differed greatly in terms of their attitude to female issues and in terms of degree to which each of them was immersed in the contemporary public debates: ‘Świt’, the most radical, was dedicated to the idea of emancipation; ‘Bluszcz’ can be described as progressive yet ideologically moderate; ‘Tygodnik Mód i Powieści’ was perceived as rather conservative. The development of the female press has been shown against the backdrop of the social changes during the Polish positivism, highlighting the significance of the year 1884, the twentieth anniversary of the January Uprising, when the ideas of positivism were in decline.
Key words: emancipation, the nineteenth century, female issues, press

Female catholics’ reading preferences in the interwar period
The author considers the problem of readership among women in the first half of the 20th century. Female readership is analyzed in diverse contexts: education for boys and girls in different epochs, ways of upbringing, the influence of religion, and the consequences of social changes (revolution in education, democratization and industrialization of society). The major example provided is the female readership of Roman Catholics as religious writings used to be thought of as the only ones appropriate for women. Religious texts was believed to be fostering their identification with traditional worldview and traditional mores; conversely, secular text could lead to the disturbance of well-established notions.
Key words: female readership, the interwar period, Catholicism, education

The emancipation of female bookbinders in Warsaw at the turn of the 19th century
The article introduces the problem of trades and crafts done by women in the 19th century. The phenomenon is analyzed by taking as an example of the job of a bookbinder, partly a female profession at the time. The author notices that most of the “working women” in the 19th century came from impoverished gentry and intelligentsia. The appearance of typically professions was closely linked with the emergence of emancipation movements. The article presents the whole process of vocational training for women, the development of female vocational schools, and the status of working women as well as their representation in selected literary works.
Key words: emancipation of women, female professions, crafts in the 19th century, bookbinding

Izabela Branicka’s (1772–1808) library in Bialystok
The author of the article presents a notable representative of the Polish Enlightenment – Izabela Branicka née Poniatowska, who was Polish King Stanisław August Poniatowski’s sister and Great Crown Hemant Jan Klemens Branicki’s wife. What comes into focus in the article is Branicka’s endeavours to create the Palace’s collection in Białystok. The author describes the process of gathering volumes, enumerates types of books included, and identifies their genealogies. Thus, Branicka’s educational project becomes an embodiment of the spirit of the Enlightenment: the Palace’s collection available to readers outside the court, almost like a public library.
Key words: Izabela Branicka, The Branicki Palace in Białystok, history of the Branicki family, nineteenth century libraries

The conservative view of emancipation
The author considers the problem of female emancipation from the angle of the contention between two worldviews: religious conservatism and liberal secularism. The article reviews the development of emancipatory ideas in the second half of the 19th century, the emergence of first periodicals for women, and first female organizations in Poland during the Partitions. Then it shows an evolution of the ideas at the turn of the 19th century. It is against the backdrop of this social context that the author presents the reaction of Polish conservative and clerical circles, which exemplifies the core of the contention—the tussle about emancipation is here understood as part of the debate over moral and social consequences of modernization. In fact, the idea of emancipation was part and parcel of the epoch’s mind-set and generated controversies in the context of all the changes brought about by positivism in Poland.
Key word: emancipation, the female issue in the 19th century, the contention of worldviews, positivism, emancipation and conservatism

‘The old-fashioned cut of a feminist’ – Julia Dickstein-Wieleżyńska and the ‘female issue’
The article draws attention to the roots of attitudes Julia Dickstein-Wieleżyńska to the „woman question”, its relation to her present and a vision of „a woman of the future.” It shows her activity of social activist, speaker and publicist. It discusses the ideological inspiration of her attitude, which was the work of Narcissa Zmichowska, Eliza Orzeszkowa Cecilia Walewska and her contemporary philosophical currents. Dickstein-Wieleżyńska saw the „woman question” from universalist perspective, characteristic for the liberal feminism. She perceived femininity as cultural category, which is subject to social change. Historical and evolutionary approach allowed her to believe in the possibility of the implementation of the „new woman”, guided by the ethos of great predecessors and free from the limitations and weaknesses.
Key words: feminism, ‘female issue’, Julia Dickstein-Wieleżyńska

In the props room of the soviet world. Autobiographical narratives of female forced-labourers during world war II
The author considers autobiographical accounts of the women – Polish prisoners – sent to Soviet forced-labour camps, mainly to Siberia and Kazakhstan, during World War II. The methodological approach assumed in the examination consists in focusing on narrative details (for example, prisoners’ possessions), on the basis on which individual experience is revealed. The record of such experience is found in allegedly “objective” descriptions of the surroundings and everyday objects. This is tantamount to a turn toward micro-histories and individual memory. However, thanks to the juxtaposition of diverse relations there emerges a panoramic view: detailed and providing an insight into the realities of the life in exile.
Key words: forced-labour camps, deportations, the Soviet Union, female forced-labourers, memories, Siberia

History of Stanisław Kryczyński’s (1911–1941) manuscripts
The author of the article sketches a profile of a historian and orientalist, Stanisław Kryczyński, who left some unpublished yet very interesting literary works. Although Kryczyński was active mostly during the interwar period, his writings are strongly influenced by modernism. His ancestors were Tatars, he, however, wrote mostly in Polish. And he is remembered mostly for his pioneer monograph on Polish-Lithuanian Tatars. The author of the article reports on his research conducted in (among many others) the University Library in Warsaw, which led to the edition and publication of Kryczyński’s unknown texts (the article features an appendix with a selected bibliography). The article is part of the project “Polish-Tatarian Literature After 1918”, financed by National Scholarly Center (NCN).
Key words: Stanisław Kryczyński, Polish Tatars, literary legacy, critical edition

Inter-media strategies – the example of humour in Polish and Ukrainian drama at the turn of the 19th century
Drawing on several examples, the author presents dramatic text as a kind of meta-cultural narrative. Drama is seen as a phenomenon encompassing literature, theatre and everyday communication process. In her deliberations the author focuses mainly on humour in Ukrainian and Polish dramas at the turn of the 19th century. Puns in drama jokes co-work with anecdotes to form an arch-text, which directs the spectator’s attention to the contexts beyond literature. The analysis of Polish and Ukrainian drama humour is instrumental in establishing the alleged aims that playwrights wanted to achieve: didactic effects, philosophical contexts, intertextual games with the spectator, literary allusions as well as those not connected with literature per se.
Key words: inter-media, intertextuality, comedy, joke, irony, parody

A trip to Vilnius

Slavists in Odessa. A report on the First International Conference ‘Representation of Odessa in slavic literatures’, 12-13 september 2013, Odessa

A report on the conference ‘Culture – Digitalization – Team Game‘

‘Metamorphoses of female emancipation formula from the 18th century to the interwar period, Białystok 26-27 september 2013‘. A report

The First International Seminar ‘Poland – Russia – Belarus. Perspectives of cooperation in the field of humanities‘.